Kyrgyzstan, the official name is the Kyrgyz Republic – the state in the northeast of Central Asia, the main image within the western and central parts of the Tian Shan.
Kyrgyzstan borders on Kazakhstan in the North, Uzbekistan – in the West, Tajikistan – in the Southwest, China – in the Southeast and East.
There is not an access to the sea in Kyrgyzstan. More than three-quarters of the territory of Kyrgyzstan is mountains. Victory Peak (Pobeda Peak), 7439 meters high, is the highest point of the country (the most northern mountain over 7,000 meters high on the ground/ from the side of China Victory Peak is called the Tomur mountain)


Currency unit: som
Kyrgyzstan has been the UN and OSCE member since 1992.
The territory of Kyrgyzstan is located within two mountain systems. The northeast part, larger area, lies within the Tian Shan Mountains, and the southwestern part - within the Pamir-Alay. The state borders of Kyrgyzstan pass mainly through the mountain ranges. Only in the north and southwest, in the densely populated Chui and Fergana valleys they pass on the foot of the mountains and foothills. 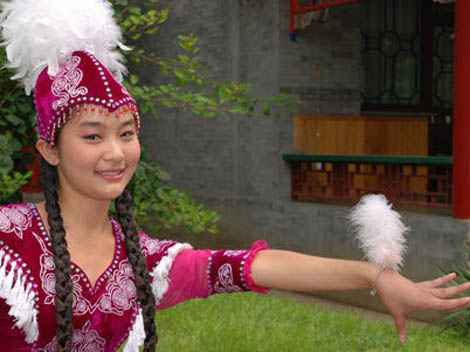 Kyrgyzstan is the multiethnic country. The most part of the population are the Kyrgyz (about 50 %). Till the middle of the 20s of the XX century they were called the karakyrgyz or wild stones (mountain) Kyrgyz, and up to the 90s – the Kyrgyz. Fairly large groups of the Kyrgyz live in Uzbekistan, Tajikistan, and also in western China and eastern parts of Afghanistan. The Kyrgyz, as their neighbors, the Kazakhs, in their anthropological appearance, render to the South Siberian type. They are characterized by a medium height, dark, often black, straight hair, brown eyes, flat, broad face, and the mongoloid slant of eyes. The Kyrgyz language belongs to the Kyrgyz-Kipchak group of the eastern branch of the Turkic languages. The modern Kyrgyz script is based on the Cyrillic alphabet.
Except the Kyrgyz there is a large community of the Uzbeks (13%) who settled mainly in the south of the country. The Russian and Russian speaking peoples, living in the North (about 25%) compose the significant part of the population. Other nations, living here are the Uigurs, Kazakhs, Tajiks, Dungans, Tatars, German, Jews, etc.
Bishkek is the capital of Kyrgyzstan. The city is located in the North of the Republic, in the Chui valley. It is an important cultural and economical region.
Kyrgyzstan – the status of the Republic. The President is the head of the government and the executive authority. The legislative power is the Parliament  - Supreme Council (Jakorku Kenesh). In August 31, 1991, in the course of the breakup of the USSR, the independence of Kyrgyzstan was proclaimed. On the 5th of May the first Constitution of the Republic of Kyrgyzstan was adopted, as the independence sovereign state; the official name of the country was changed: the Republic of Kyrgyzstan instead of Kyrgyzstan. On the 10th of May the own national currency – “som” was established in Kyrgyzstan.