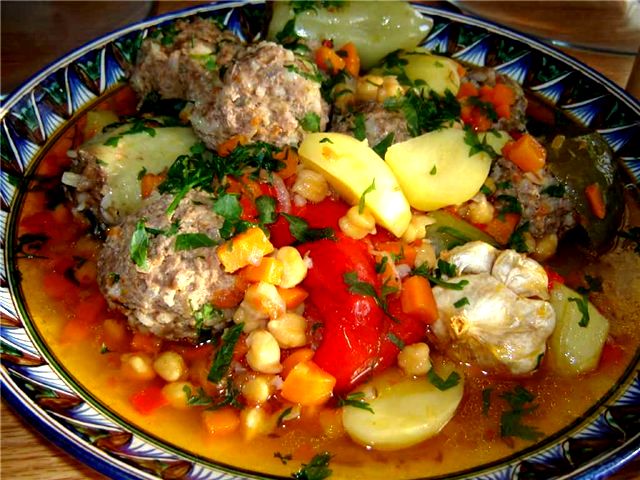 The Kyrgyz national cuisine is characterized by different meat, milk and flour dishes. Various kinds of meat are used for cooking meat dishes, they are: horse meat, mutton, beef, poultry, as well as meat of wild animals: mountain goat, sheep, roe. Brew is the most widespread way of the heat treatment of meat dishes.
The favorite dish of the Kyrgyz is beshbarmak – chopped boiled meat of a young sheep. The meat is poured with the bouillon and mixed with the right angled noodles, which had been cooked in this bouillon before. The cooked mutton, which is cut for wide boggy slices before, is eaten with the pieces of finely rolled cooked dough in the form of squares. This dish is called kulchetay. 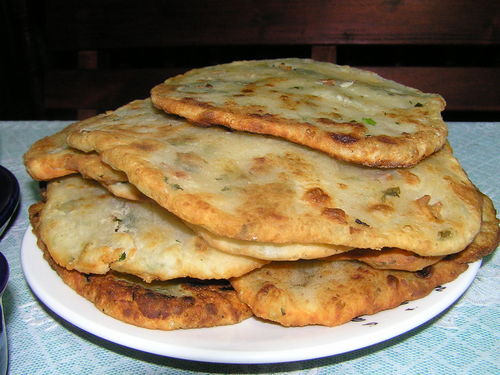 The sausage from the horse meat with fat, called “chu-chuk” is the delicacy. Along with traditional meat dishes, new, borrowed from neighboring nations dishes, became widespread. They are meat soup (shorpoo, shurpa) with potatoes and onions, fried potatoes with meat (zharkop), steam pelmenis (chuchbara), lagman, etc. Especially the dishes of meat, combined with the dough - khoshan, gashnan (cakes), samsa, goshkiyde and others are typical for the Kyrgyz cuisine. For cooking various dishes such vegetables as onions, tomatoes, cucumbers, cabbage and carrots are most commonly used. In southern Kyrgyzstan pumpkin is popular. It is put into the soup, pelmenis, it is eaten with meat and it is cooked as a separate dish.
Except ayran and kumys, kurut is made from milk and dairy products. Kurut is a kind of sour cheese (it is put by and used in dry condition, or mashed and diluted with warm water), cottage cheese, boiling cream (kaymak), fresh cheese from boiled curded milk - pyshlak and others. 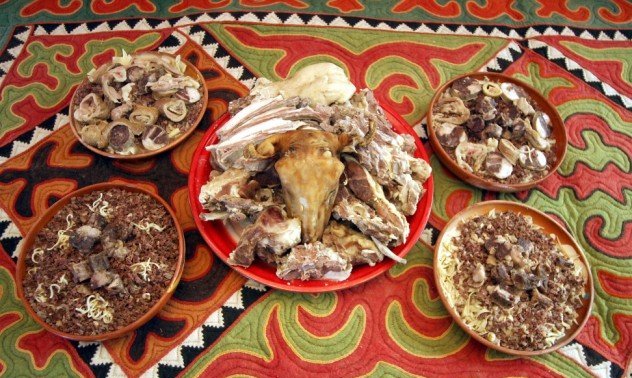 Baking takes a great place in the Kyrgyz national cuisine; they are biscuits such as khvorost (choymo tokoch), foliated cakes (zhupka), which are added in the hot milk and flavored with butter and cottage cheese, puff flat bread with butter and sometimes cream (kattama), fried in oil cakes, pancakes, etc. Boorsoks, the favorite delicacy of the Kyrgyz, is cooked from flour; boorsoks are the cut pieces of dough fried in oil. It should be noted that the pastry is mainly consumed with tea.
Tea is one of the most popular drinks among the Kyrgyz, and in summer the Kyrgyz prefer green tea (kok tea). This drink is consumed in the morning, afternoon and evening. In Issyk-Kul region tea is drunk sometimes with fresh milk and a little salt. A peculiar kind of tea is "atkanchay." It is cooked in a special way with milk, butter, sour cream and salt. The refreshments for tea, except cakes and boorsoks, serve butter, kaymak, dried fruit, honey, etc. The Kyrgyz remained the old tradition: the most nourishing meat meal is consumed mostly in the evening.