In November, 18 in Bishkek the event devoted to the 20th anniversary of the establishment of diplomatic relations between Japan and Kyrgyzstan will be held 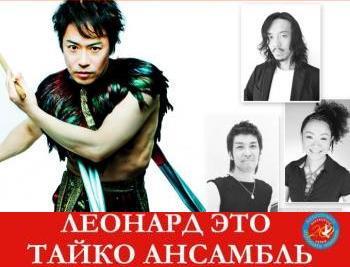 On the 18th of November at 18:00 pm in the Kyrgyz National Conservatory and on the 19th of November at 18.00 in the Kyrgyz National Philharmonic the concerts of the ensemble of drummers of Leonard Eto will be held.
The event is dedicated to the 20th anniversary of the establishment of diplomatic relations between Japan and the Kyrgyz Republic.
The ensemble includes: founder - drummer Leonard Eto, drummers Miho Wes Sugi, Kenichi Koidzumi, Yura Hidenori and Dodgi - step-dancer.
"The ensemble of drummers had a significant impact on the music and the entertainment industry in Japan, as well as in Europe and the U.S.A. The ensemble is actively cooperating with foreign artists participating in many festivals, its recordings are used in movies and advertising. The sound of the ensemble creates a unique "comfort tension" and the stereo effect, keeping the organic link with the ancient traditions of performance on traditional Japanese drums "- mentioned the organizers.
The entrance to the concert is free.