Legends of the lake Issyk-Kul 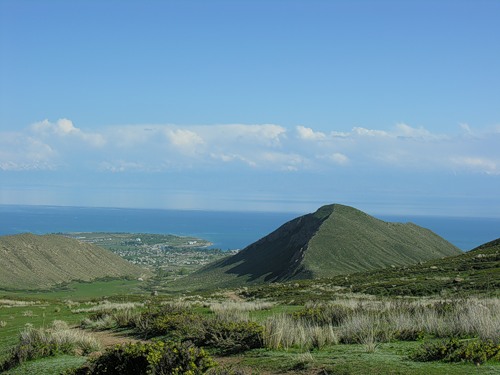 Issyk-Kul lake is a unique lake, from ancient times it considered magic.
There are many legends about the origin of the Issyk-Kul. One legend tell that the origin of the lake is connected to a beautiful girl, who gave her life for her sweetheart.
In ancient time there was an old city. The city belonged to the old and powerful khan, who was rich, but cruel. Once the khan knew that a beautiful girl lived in one poor family, and he decided to own her. The girl loved another young man. One day her sweetheart was leaving and put off the ring from his finger and put it on the girl’s finger. He said: “I will back soon. Never put off the ring; while you are wearing it, you are safe.” When the delegators of the khan came to the girl with rich gifts and made a proposal of marriage, she, as before, replied that she loved another man and would not become the wife of the khan.
The girl went to the mountains hoping again to meet her  sweetheart, and suddenly she noticed that the ring disappeared. She cried and decided to go back home. But suddenly the armed horse riders surrounded her and then took her to the castle. The khan gave to the girl jewelry, but no gifts could not shake the girl. Finally the khan decided to obtain the girl by force. He rushed to the girl, but she ran up fast to the open window and with the loud cry she threw down. At the same time the walls shivered, the granite arches collapsed, the dark castle of the old khan fell, and the water gushed out of all the gorges. The remains of the khan’s castle passed out of sight, but the water became more and more, until flooded the huge valley. “And so, this wonderful lake Issyk-Kul was formed. 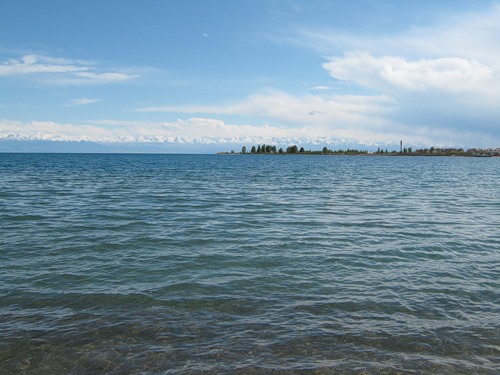 There is another legend.
In ancient times on the place, where now there is a high mountain lake, a beautiful and big city was. Once there was a great earthquake, which did not spare building and men. The earth went down, and the formed cavity was filled with water. The lake appeared on the place of the town.
On the eve of the terrible earthquake a group of young girls left the town and went to the mountains to pick up the brushwood. Only these girls stayed alive. Every morning they began to come to the lake, cried, and could not come to terms with the loss of their loved relatives. Sitting on the shore they cried, and their salt tears dropped to the lake. So the lake became salty. The old men told that the lake took many human lives. The bitterness of grief and anguish of the girls subsequently reflected in the title of the lake - "Issyk" – (hot tears).
The elder respectful people consider that the character of the lake resembles the mood of those girls: it can be silver-grey, storming, raging and calm, pensive, admiring you with its waters of sapphire color. “Kul” – is translated from the Kyrgyz as “lake”.

The next legend tells: “In ancient times on the place of today Issyk-Kul there was a large city. The ruler of the city was a cruel khan Iskander. He had a big secret: he was two-horned. To safe his secret he executed the every man, who shaved and cut him. Once there was a turn of the son of a poor widow to cut the khan. She knew what her son was going, and tried to save him: she baked three flat breads and advised a son to treat the khan. When the young man came to the khan he dropped the first two flats. When he dropped the third one, the khan picked it up and tasted it. It was very delicious. The khan asked the man what the flat was baked from. So the young man and the khan became the foster-brothers. The khan took a promise not to tell anybody about the khan’s secret and left the young man.
On the third day the man came again to the khan, the man’s stomach swelled and he wanted to tell somebody about the khan’s secret. The khan ordered to open the cover of the big well in the center of the city and to cry three times to the well: “Our Iskander-khan is two-horned”. No sooner had the boy call out a third time, as the water gushed out of the well and flooded the city. So the lake appeared. The lake Issyk-Kul.”

One of the legends tells that Tamerlane, the great Central Asian conqueror, three times appeared on the shores of the lake – in 1376, 1388 and 1392. He wanted to subdue the local tribes, but all his marches were unsuccessful. When the arms approached, the tribes moved on another places, when the arms left the country, the tribes came back again. 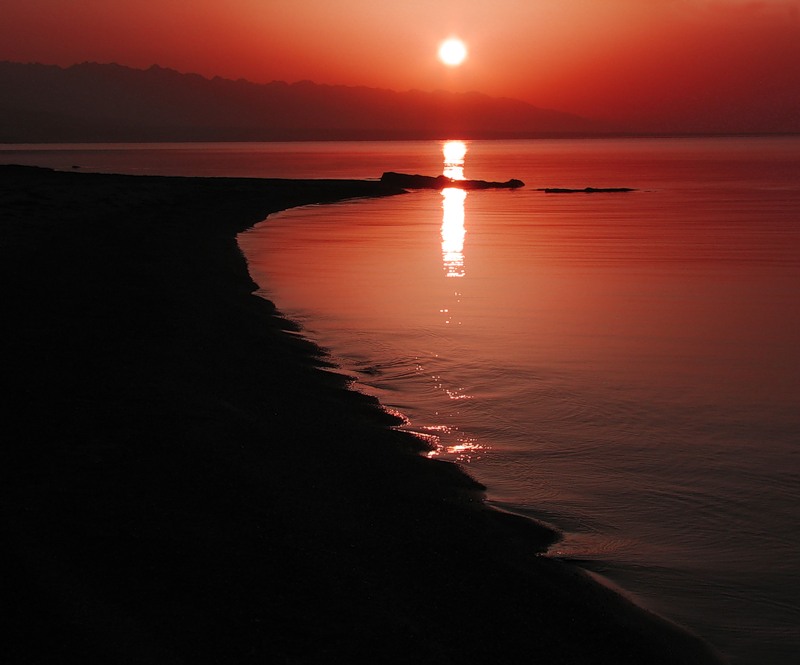 And when Tamerlane next time came to the shores of the lake Issyk-Kul, he ordered to soldiers to take stones and through them to one heap. As a result the high mountain rock appeared. When Tamerlane was arriving from the march, he wanted to know how many soldiers stayed alive. And then he told the soldiers to take stones from the first heap and throw them near to the second one. He became very sad, because the second heap was much less than the first one. The stone heap is a pass eastward of the Issyk-Kul Lake, and it is called Santash (“counting stones”).

There is also a legend that tells that near the Northern shore of the lake there is a flooded abbey, where the relics of Apostle Matthew are. For example, on the Catalonia map of the world, created in 1375, there is a real image of the building with the cross, and near there is an inscription “Issyk-Kul. Here is the abbey of the Armenian brethrens, where the relics of Saint Apostle Matthew are.”  In recent times the searches of relics and monastery have activated. There are also legends of flooded treasures and cities based on the real facts. During the underwater excavations in the coastal zone the medieval cities, including the capital of the Usuns - Chiga, were found out.

Historical facts about the Issyk-Kul lake:
1. At the beginning of the XX century the map with the plan of treasures, dug at the Issyk-Kul, was taken from Kyrgyzstan to China.
2. In 1926 the emigrants from China with the help of this map began the excavations of the Kurmentinskaya cave in search of the treasures.
3. Treasure hunters at a depth of six meters found the stone grave with unknown inscriptions (according to the plan) and two old “hammers” – one was copper, and the second was golden. The golden hammer was handed to the office “Zolotosnab” Prejevalsk city in 1930. It was officially registered. Then the treasure hunters were forbidden to continue the researches.
4. In 1952 in strict confidence such serious organization as the Ministry of State Security started the treasure searches.
5. In 1968-75 the Kyrgyz general E.Aliev, the witness and participant of first researches, officially addressed to the Soviet Ministry, Committee of State Security and the Academy of Sciences of the Kyrgyz SSR with the proposal to continue the treasure search. 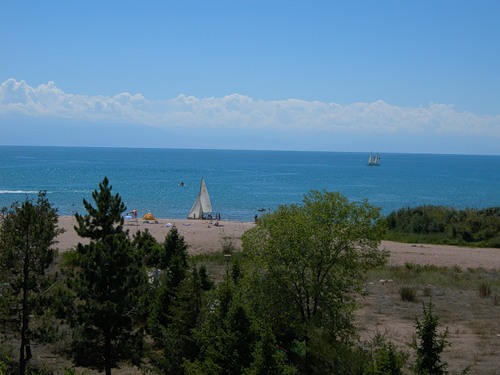 6. On the 27th of August, 1975 the All-Union Party newspaper the “Pravda” in the article “Return to the mystery” informed that the Ministry of Internal Affairs was engaged in searches of Genghis Khan’s treasures at the Issyk-Kul.
7. In 1976-77 the Kyrgyz geological administration, checking the legends about treasures, is secretly holding the probing of the area in the Kurment region, and gave the conclusion that the presence of the metal is at a depth was not excluded. It was recommended to study the object with the help of the archeological methods that is excavations.
8. In 1996-97 without the advertisement the works of the archeologists and geologists were started. But they were stopped because of lack means.
9. In 1999 the permission to conduct large-scale investigations involving foreign investors was got. The special Commission was formed.

Of course, treasure is a child of chance. But the chance may be cute to you!